This is my review of The Untamed Chinese Drama Episode 40. Jin Ling thinks Si Zhui wants to absolve for Wu Xian, but Si Zhui tells Jin Ling not to conclude before looking into the case. Jin Ling mentions many men died in Wu Xian’s hand, and he won’t forget the revenge that Wen Ning killed his father. The man stops their fight, and thinks the dishes will be cold. Si Zhui apologizes to Jin Ling and asks him to take a seat. 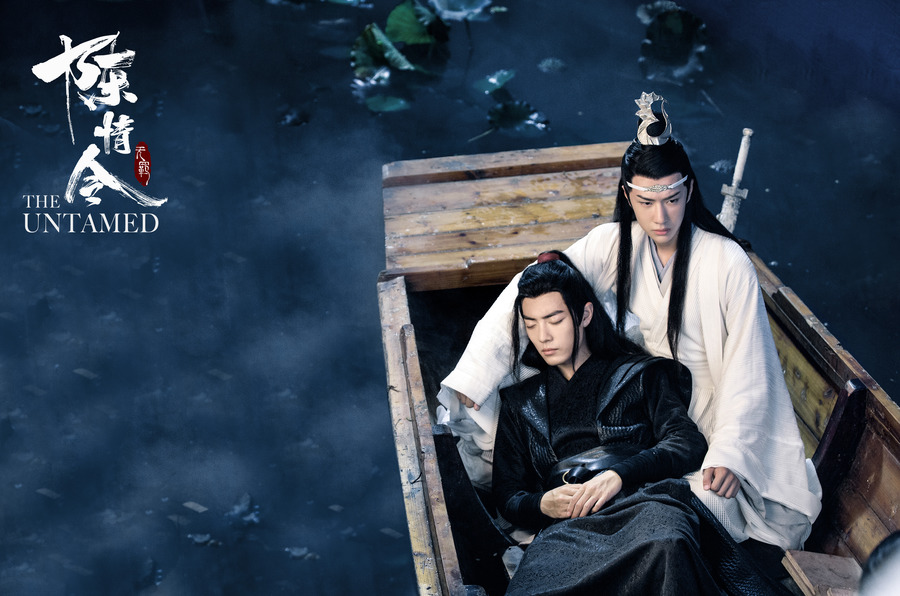 Lan Zhan shows up and asks for the wine. The students walk to their seats. Si Zhui thinks he saw it wrongly as Lan Zhan took the wine. Wen Ning shows up outside the window and asks Wu Xian if it was Yan Li’s son. Wu Xian admits it and Wen Ning falls to the ground when Lan Zhan calls Wu Xian. Wu Xian tells Wen Ning to leave, and is surprised that Lan Zhan brought wine to him.

Lan Zhan gets the wine for Wu Xian and reveals Xi Chen recognized him and Jiang Cheng knew who he is. Wu Xian wonders why Lan Zhan recognized him, and Lan Zhan wonders why Wu Xian’s memory is so bad. He invites him to go to golden stage with him next month, and Wu Xian learns that Lan Zhan thought Chifeng Zun’s head was hidden there. He thinks it proves their speculating, but worries about Ze Wu.

Ze Wu shows up and invites Wu Xian to go to golden stage with Lan Zhan. He promises to do the self-evident truth if they can find the evidence.

Wu Xian arrives at golden stage with Lan Zhan and Ze Wu. Jiang Cheng wonders why Lan Zhan came, and asks Zi Wu to introduce Wu Xian to him. Meng Yao joins them with Jin Ling, and Jiang Cheng scolds Jin Ling. Meng Yao explains that Jin Ling knew that he made the mistake, and he didn’t dare to eat because he worried Jiang Cheng to punish him.

Jin Ling tells Jiang Cheng that he didn’t have any appetite these days, but Jiang Cheng thinks Jin Ling looks good. Jin Ling asks Wu Xian why he came, but Meng Yao thinks Wu Xian is a guest. He tells Ze Wu not to restrain.

Wu Xian tells Lan Zhan that the people there know Xuan Yu, and thinks he can only pretend to be silly when people asks him strange questions. He doesn’t want to shame him, but Lan Zhan tells Wu Xian not to provoke other people.

Meng Yao shows up with his wife Qin Su, and she has the eye contact with Wu Xian. Meng Yao asks the guests to drink the wine, and Huai Sang cries to ask Meng Yao to help him. So Meng Yao asks Qin Su to leave. Wu Xian thinks the people of Jin family’s eyes are weird when they look at him, and wonders what Xuan Yu did. He thinks he confessed love undress, and tells Lan Zhan to watch on Jiang Cheng. He asks him to stop Jiang Cheng if he looks for him. Lan Zhan reminds Wu Xian to remember his status.

Jin Ling wonders how Wu Xian got in the yard, and Jin Chan shows up and wants to give Wu Xian a lesson because he thinks Xuan Yu is his student. But Jin Ling points out that Wu Yu isn’t the student anymore as he got kicked out. He thinks he should ask Lan Zhen first if he wants to give a lesson to Xuan Yu.

Wu Xian shares that Lan Zhan taught him the art, and thinks they will break Jin Ling’s art if he used it many times. He tells him to learn more arts from him, and Jin Ling reveals Jiang Cheng always persuades him. Wu Xian tells Jin Ling not to listen to Jiang Cheng, and shares that the people he wants to beat are more and more after he grew up. He tells him that his life isn’t complete if he doesn’t fight with people.

Jin Ling asks Wu Xian why he came the backyard and thinks he still loves Qin Su. Wu Xian blocks Jin Ling’s mouth, and shares that he loves someone else. Jin Ling asks Wu Xian if he is Xuan Yu, and Wu Xian thinks he saw Xuan Yu’s looks. Jin Ling shares that Xuan Yu’s face was ruined. He tells Wu Xian not to appear since he wears the mask. He threatens to call the dog if Wu Xian doesn’t leave. Wu Xian runs away.

Qin Su tells Meng Yao to kill her, and asks him how their son A Song died. He mentions A Song was killed by someone else, but she thinks all they knew are fake. He reminds her that A Song is his son, but she thinks nothing he doesn’t dare to do. He walks to her and asks who gave her the letter. He thinks the person will tell it to other people. Wu Xian wonders if the guy is the same person guiding them to look for the body of Chifeng Zun.

Qin Su thinks Meng Yao isn’t a human, and he shares that he had no other choice. He reminds her that people will look down on her if they know it. Qin Su yells that she wishes not to be related to him. He tells her that he loved her before, and remembers she never said anything to his background. He backhugs her and tells her that he loves her, but he reminds her that A Song has to die. She turns around and slaps him. She complains that nothing he cannot do for the position.

Meng Yao asks Qin Su if she doesn’t want to tell the person to him, and she thinks he will kill the person. He reminds her there are many guests outside, and stuns her. Meng Yao takes Qin Su to the cell, and the paper person follows them. Meng Yao tells Qin Su that she can go back if she tells the person to him. He notes that someone is staring at him, and takes away the cloth. We see the head of Chifeng Zun. Meng Yao thinks Chifeng Zun doesn’t forgive him after many years.