This is my review of Black Knight Korean Drama Episode 10, Park Cheol-Min wants to see Seo Rin and gives luck ring to Jang Baek-Hee as fees. Sharon is shocked after she saw her photo which was shot 100 years appears in Kim Young-Mi’s shop. 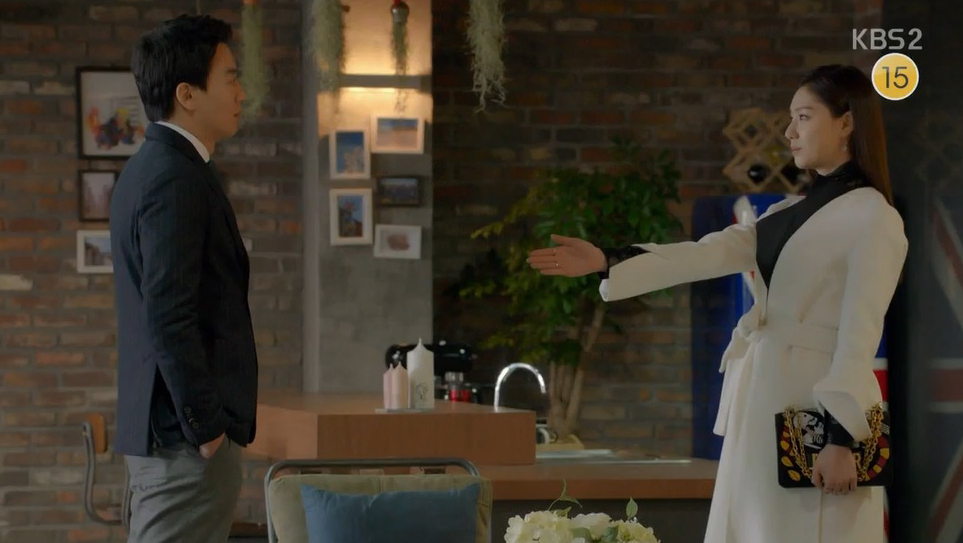 Park Gon knows Choi Ji-Hoon is Jung Hae-Ra’s ex through Sharon after they are drunk. Lee Sook-Hee thinks there is something happened between Moon Soo-Ho and Jung Hae-Ra when she sees they looking at each other with smiling, although they denies it.

Moon Soo-Ho knows Yoon Dal Hong’s son got a car accident and is in a coma. Park Gon tells Choi Ji-Hoon that he knows he is Jung Hae-Ra’s ex and reveals they are good friends since childhood. Choi Ji-Hoon tells him that he isn’t intention to cheat her, it’s just a mistake, and thinks it’s not a sin to love her. But Park Gon thinks he fooled Jung Hae-Ra and is going to reported it to Moon Soo-Ho.

Moon Soo-Ho lets his assistant send a basket of flowers to Yoon Dal Hong with blessing. Park Cheol-Min treats Jang Baek-Hee brunch and asks her about Seo Rin, Jang Baek-Hee tells him that Sharon is alive but she gets old. Sharon asks Yang Seung-Goo’s suggestion regarding the shirt which she wears. Yang Seung-Goo thinks it was made for male.

Jung Hae-Ra wants to visit Sharon with her friends, but she rejects it. Park Cheol-Min shows his collecting to Jang Baek-Hee, but she thinks there isn’t any item which she is looking for. He gives her the luck ring which was found in yellow tail’s stomach and asks a meet with Sharon, Jang Baek-Hee recalls Sharon told her that she lost the luck ring from the cliff.

Sharon is shocked when she sees Kim Young-Mi use her photo which is shot 100 years ago in her shop, she asks to buy the photo, but Kim Young-Mi rejects it and tells her that she will give her as present if she can do business with her and Jung Hae-Ra. Sharon pours a cup of tea on the photo and breaks it.

Sharon feels depressed even if she ate so many taffies and asks Yang Seung-Goo to buy some cakes, but he rejects it and want to quit. Sharon orders him to buy cakes before he quits. Moon Soo-Ho persuades Jung Hae-Ra to invite Sharon to do the business together even if she rejects it.

Choi Ji-Hoon gives Moon Soo-Ho the shirt which made by Sharon to thank him for recommending clients to him. Director thinks Jung Hae-Ra is interviewing with other companies after he sees she isn’t in the office. Jung Hae-Ra brings draft proposals to Sharon, but Sharon doesn’t want to do business with her. Jung Hae-Ra wears a veil hat after seeing so many wedding dresses in the tailor and reveals she wants to get marry with someone she loves. Sharon hurts Jung Hae-Ra’s face with her scissors. They have a fight after Jung Hae-Ra sees the blood on her palm.

Sharon thinks Boon Yi didn’t respect her and bit her since she is just her slaver. Jung Hae-Ra returns and apologizes to Sharon with delicious food, Yang Seung-Goo thinks she has nice personality. Jung Hae-Ra is upset after she knew her project is cancelled as other companies copy her idea. She hugs Moon Soo-Ho tightly after she runs into him, he claims his heart is burning and takes out roasted sweet potatoes from his chest, she lets him not make fun since she is sad.

Moon Soo-Ho invites Lee Sook-Hee to join their dinner and reveals she and his guest are their family. Lee Sook-Hee runs into Jang Baek-Hee outside and recalls she is the person who paid off the debt for her and asked her to take care of Jung Hae-Ra. Jang Baek-Hee lets her pretend they never met before.

Ahn Chan Ki visits Sharon and wants to do business with her, she isn’t interested in his project initially but she accepts it after she knows his boss is Moon Soo-Ho. Moon Soo-Ho reveals there are two persons who saved his life, they are Jung Hae-Ra and Jang Baek-Hee. Jang Baek-Hee reveals she encouraged him when some bad things happen to him and gives the luck ring to him, letting him to melt it when he wants to make matching ring with Jung Hae-Ra. Lee Sook-Hee thinks Jang Baek-Hee is acting Jung Hae-Ra’s mother-in-law.

Jung Hae-Ra comes up with new ideas but are voted by director, she wants to get angry but calm down ultimately. Moon Soo-Ho appears, director introduces him to the team members and reveals he will work with them. Moon Soo-Ho hugs her when they are outside.